Last April, my father in law spent an amusing day in North Dakota. It was just one day, but his journey was intentional. For decades, he’s dreamed of completing a particular goal: He has wanted to visit all 50 states. Since he already knew that Alaska would be his culminating state this summer, he bought a purposeful plane ticket to North Dakota. He would spend one day in the Peace Garden State and gain his 49th state.

He arrived in Fargo and found a Visitor’s Center. Once he opened the door, he saw an easel. It read, “Welcome to Your 50th State!” With some eagerness, he looked forward to telling the staff that he was indeed in the midst of an all-state journey. But in a move I find to be hilarious, once he told them that this was his 49th state, they were completely unimpressed.

The staff member told him they have a “Save the Best for Last Club.” If North Dakota is a person’s 50th state, that person gets a patch and other memorabilia. My father in law asked if he could have a patch, and they refused.

No Soup For You.

Actually, the staff members weren’t jerks. They were quite nice, but they were steadfast about the rule. A few minutes later, a couple walked in and said, “Hey, this is our 50th state!” They got the patch and other gifts. They got to sign the book with hundreds of names. My father in law stood there deprived.

I find all of this to be so funny. But what I love most of all is that THIS IS A THING. People do this regularly enough that staff members at the North Dakota Visitor’s Center expect it. It turns out that North Dakota is the least visited state in the whole nation, and apparently, a sizeable percentage of visitors come for the precise purpose of saying, “Well, let’s go claim our very last one.” In the midst of this, North Dakotans have embraced a particular form of lastness, and they celebrate it as a culmination. There must be a lot of life metaphors in there somewhere. I love it.

In actuality, there are many great reasons to visit North Dakota. The landscapes of Theodore Roosevelt National Park and the International Peace Garden are gorgeous. In particular, Native American communities have been advocates for the welfare of this land. I admire the steadfast ways they are protesting currently to protect that land from the planned Dakota Access oil pipeline. They need our support in this effort.

My father in law didn’t have time to see this land in detail since he was only there for one day. He didn’t get to join the “Save the Best for Last Club” either. But he did get a funny consolation prize. In the very same Visitor’s Center, the staff let him pose for a picture with the Fargo wood chipper. 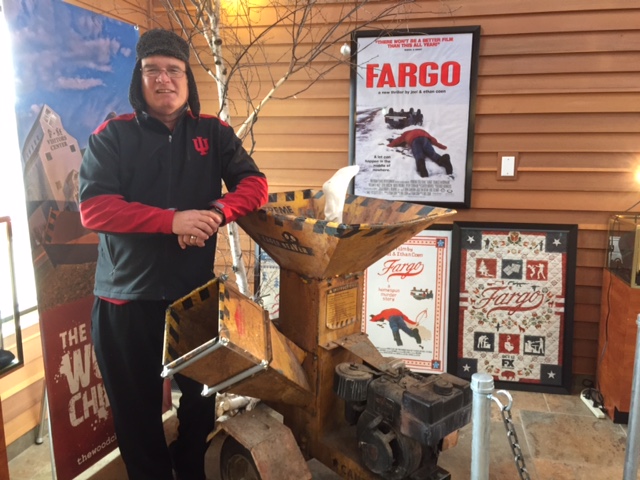 What If We Ask a Different Question?