On the third day there was a wedding in Cana of Galilee, and the mother of Jesus was there. Jesus and his disciples had also been invited to the wedding.
John 2:1-2

Toward the beginning of Jesus’ ministry, a wedding was held in Cana of Galilee. Jesus, his mother, and his disciples were all present for the celebration. If we could have taken it in, we would have seen a large, significant event taking place before our eyes. Behind-the-scenes details were unfolding in every direction. This wedding celebration was quite the undertaking.

It took place about ten miles from Jesus’ hometown of Nazareth. [2] That’s a short distance in our thinking, but guests didn’t travel quickly with modern forms of transportation. There was no back and forth in this endeavor; wedding guests would have stayed in Cana for several days. Following first-century Jewish customs, the couple had already been united. This celebration was a seven day feast held by the family of the bridegroom. [3]

This means that the guests would have stayed overnight for a week. Every meal would need to be provided. This wedding celebration involved detailed planning, and along with it, there were high expectations for hospitality in this culture.

This may help us understand that it was a near crisis when Mary
came to Jesus and said,
“They have no wine.”

The bridegroom’s family was quickly running out of wine for their celebration, and it was cause for public embarrassment and shame. Mary may have spoken her words to Jesus with panic, or perhaps she said them firmly to indicate that the situation was becoming a serious faux-pas.

Whatever tone Mary used, there was a clear subtext in her statement. Jesus recognized right away that she wanted him to intervene in the situation. At first, he didn’t want to do that. He responded by asking, “Woman, what concern is that to you and to me? My hour has not yet come.” That’s an intriguing response.

But Mary’s response is an intriguing one too. She doesn’t argue with Jesus, and she doesn’t take the time to have a theological conversation with him. She just nudges the process forward. She looks at the servants who are nearby and says, “Do whatever he tells you.”

This is an interesting conversation between Jesus and his Mother. When we encounter Jesus’ response — “Woman, what concern is that to you and me?” — it may strike us as a rude and abrasive statement. But actually, this was a common way of saying that he simply wanted to keep distance.

He also offers his reasoning: “My hour is not come.” The author of the fourth gospel always paints Jesus as someone who knows exactly what he should be doing with the time at hand. Jesus is not typically depicted as someone who is unclear about God’s timing for his life.

Yet in a unique way, it appears that Mary’s voice nudges Jesus into recognition that
the moment is indeed at hand.

Despite Jesus’ initial hesitance, she moves it all forward anyway, and wonderfully, he shows forth his very first sign.

The story of the wedding in Cana reminds us that deeply connected relationships aid us in discerning our sense of calling as we see God’s presence in our midst.

Karoline Lewis, scholar and co-host of the Sermon Brainwave Podcast, has beautiful words to share about Mary’s role in this story:

“This points out relationship. . . She sees who Jesus is. She recognizes what he’s capable of doing, and she’s the one that initiates his act of public ministry. . . It’s his Mother saying, ‘You can do this. I’ve seen you. I’ve watched you for 30 years. I know who you are.'”[6]

Mary knows her son. She knows that the hour has come.

In Cana, Mary nudges forward a transformational moment, and Jesus reveals who he is. He tells the servants to fill stone jars with water, and soon after, they marvel. With grace, Jesus choreographs this feast with joy as he converts life-giving water into life-giving wine. He performs his first public act of ministry, a stunning sign which demonstrates God’s abundant grace and presence among people.

When the servants bring the wine to the chief steward, he is flabbergasted by its quality. He exclaims, “You have saved the best wine for last!” There is a great outpouring of joy. Jesus experienced and celebrated this abundance alongside the people.

The wedding at Cana is a beautiful story that reveals the character of an abundant, grace-filled God. It is good news for us and among us.

In my context near Detroit, people are striving for justice and abundance. Last week, a large number of teachers coordinated efforts to call in sick, and Detroit Public Schools had to close a number of its school buildings for the day. These teachers sought to call attention to the deplorable physical conditions in their learning environments. Soon after, they began tweeting photos that are both heartbreaking and appalling. Some children in Detroit spend the entire school day in their coats because the heating is insufficient. Many floors and ceilings are damaged. Some schools have rodents and fungi living and growing within their buildings.

These children in Detroit are often missing out on an experience of abundance, and it can rob them of their sense of joy. It makes learning difficult, and tragically, these young, impressionable children may begin to internalize that they do not have much worth or value. This can have consequences for a lifetime.

Recognizing this as a crisis, we might imagine Mary coming to Jesus to say,
“They have no heat.”
The hour has indeed come.
It is time for us all to be spurred into action. 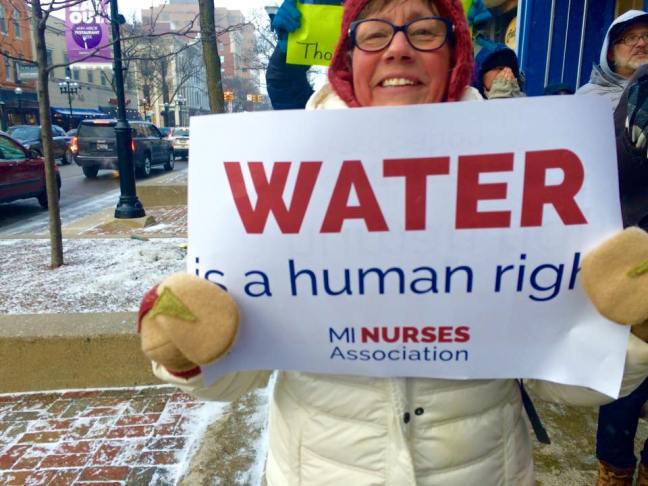 And this week, the nation and the world have been watching the unfolding story in Flint. Under the watch of state emergency management two years ago, Flint stopped using the water supply from Detroit and hooked up to the Flint River. Against standard protocol, no corrosive controls were added to the water, unleashing dangerous levels of lead into homes. This has caused a number of problems for all residents, but most damaging, it has created raised levels of lead in children. It has been poison to their system and has created irreversible brain damage in some. In many cases, this lead poisoning will increase health and behavioral concerns for years to come.

Recognizing this as a crisis, we might imagine Mary coming to Jesus to say,
“They have no water.”
The hour has indeed come.
It is time for us all to be spurred into action.

So how can we stand by without acting? How can we remain silent?

I’ll close with these incredible words from the Prophet Isaiah.
May we be spurred onward to live this way:

Upon your walls, O Jerusalem,
I have posted sentinels;all day and all night
they shall never be silent.You who remind the Lord,
take no rest, and give him no rest
until he establishes Jerusalem
and makes it renowned throughout the earth.
Isaiah 62:1, 4, 6-7

This post is adapted from my recent sermon at St. Andrew’s Presbyterian Church in Dearborn Heights, Michigan. I am grateful for the insights that Carol Lakey Hess shared in her Theological Perspective column in Feasting on the Word: Year C, Vol. 1 (Advent through Transfiguration). Hess points out the need for us to follow Mary’s example in prayer and advocacy. Her words and scholarship influenced my thoughts above.

[1] I found this image of the cracked pot here.

[2] In her Exegetical Perspective column, Linda McKinnish Bridges mentions that Cana is less than ten miles north of Nazareth. This column is part of Feasting on the Word: Year C, Vol. 1 (Advent through Transfiguration).

[3] I learned about first-century Jewish wedding customs from Steve Rudd on his website.

[5] This beautiful image of a mother and child  from Burkina Faso comes from this website.

[7] I found this image of wine on the Saint John Bosco Parish website.

[8] This image from Detroit was found in a Detroit Free Press article.

[9] This photo comes from a protest I attended on January 18th in Ann Arbor. People marched and sought justice for Flint as they protested outside of Governor Rick Snyder’s residence.

Love on the Screen

With A Full Moon in Each Eye