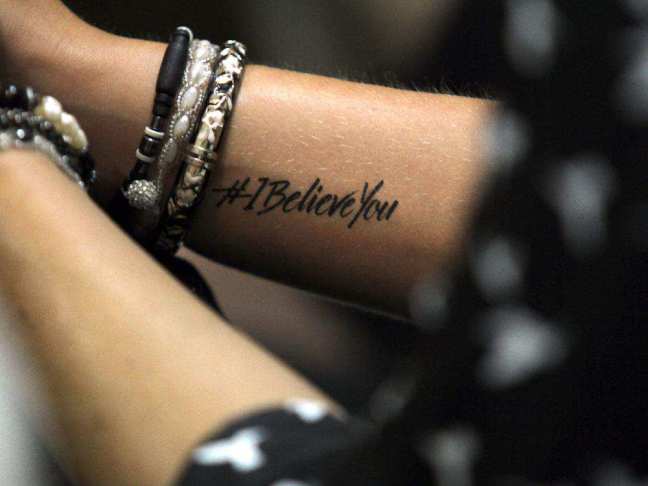 A couple of weeks ago, my friend Sarah Watkins wrote something succinct that spoke volumes in its power. She said,

“If you want to be a good ally to someone, believe them. Do you know how often people who are marginalized and abused are doubted about their own experiences?

When people experience trauma, abuse, harrassment, discrimination, or loss at the hands of those who misuse power, there is frequently an additional burden to carry. There are fears about the possibilities of not being believed. While some may dismiss survivors’ stories as outright fiction, the wounds of being disbelieved can take many forms.

Some forms of disbelief may seem more subtle, yet they can be just as damaging. They may involve unfairly questioning the character or the mental stability of the one who has been wronged (see also character assassination and gaslighting) or they may involve moments when bystanders shrug their shoulders with chosen indifference and say, “I’m sure there are two sides to every story.”

There may indeed be multiple perspectives for any given story, and in many instances, it is important to try to understand those. At the same time, we often uses phrases like, “I’m sure there are two sides to every story,” to neutralize a scenario that is far from neutral. In the process, we dismiss the very real wounds carried by the ones whose bodies, minds, spirits, and social standings have been harmed. And when we say such phrases internally inside our own minds, we often relieve ourselves of feeling discomfort or empathy. Most of all, we give ourselves permission never to question the persons or systems responsible for creating that trauma, abuse, harrassment, discrimination, or loss.

In my community of faith, we are currently experiencing the season of Easter together, allowing ourselves to be surprised by resurrection, new life, and healing. In one of our Easter stories, a disciple named Thomas has heard from others that Jesus has been resurrected to new life, but he has not yet seen this for himself. Perhaps unfairly in our culture, he has been labeled “Doubting Thomas,” but I can certainly understand the pain he carries when missing this reality for himself. In his frustration, Thomas says this about Jesus: “Unless I see the mark of the nails in his hands, and put my finger in the mark of the nails and my hand in his side, I will not believe.”

And that’s when Jesus makes a very grace-filled choice.

Jesus appears to Thomas and shows him the scars he still bears, and Thomas does indeed believe. It transforms his life.

If we want to be good allies
and good human friends in the face of suffering,
we need to believe the stories that survivors share.

Because when we see and hear these wounds truthfully, and
when we honor the value and personhood of the ones standing before us,
we add our own humanity and support.
And when  belief, empathy, and love take hold,
we might just witness healing and new life itself.

I Believe in Communities

Watching With The End in View

Cancer and COVID by Ben Johnston-Krase

When Kakistocracy Takes Up All the Brain Space

How Are Medically Vulnerable Students Experiencing a Return to Campus?

Support for the GEO Strike at the University of Michigan