I wrote this piece last year in preparation for this day — not only for Halloween, but to mark the upcoming 500th anniversary of the Protestant Reformation which is today. Some folks believe we’re in the midst of a new Reformation now. This rings true to me as well. So I share this again for our pondering. . . and wondering. . . and dreaming. . . 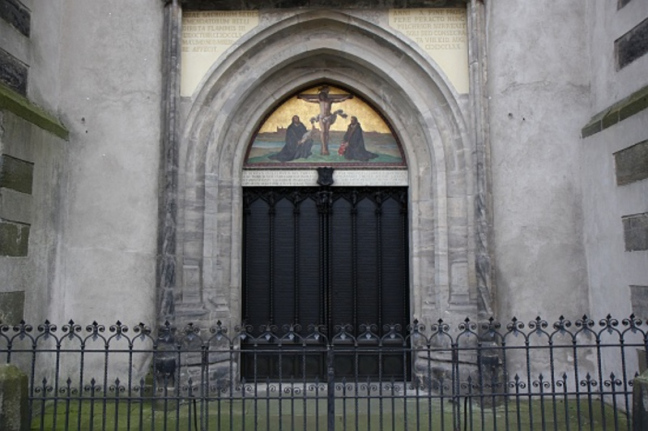 The Reformation That Formed Us

When Halloween night rolls around in 2016, we’ll surely experience traditions that are cherished, annual rituals. Tiny goblins, witches, and Elsas (we’ll still have a zillion look-alikes from Frozen) will ring our doorbells and shout, “Trick or Treat!” with gusto. Some of us will carve pumpkins, and some of us will go on hayrides in the midst of the chilly, autumn air.

Those traditions will be lovely and expected.

But when Halloween night rolls around in 2017, the world will experience a large scale anniversary. October 31, 2017 marks the 500th anniversary of the start of the Protestant Reformation — the fateful day when Martin Luther, a Roman Catholic monk and professor, nailed a list of demands to the double doors of the Castle Cathedral in Wittenberg. Those demands are called the 95 Theses, and they ushered in a movement for reform of the Christian Church.

There is no need to completely romanticize this moment of change. It did lead to solid reforms, and along with the development of the printing press, it placed the words of the Bible into the hands of the individuals for the first time. But in the process, this movement for reform also led to wars, persecution, and the splintering of the Church into innumerable denominations.

I have no expectation that the entire world will geek out over this 500th anniversary next year. My good friend from seminary used to dress up as the Wittenberg Cathedral doors for Halloween, and I imagine she might do it again for such an anniversary. But I doubt that many non-church geeks will take notice. Maybe there will be a Google Doodle for it.

Instead, though this reformation still informs our world, this anniversary may feel irrelevant to those who are losing their connections to institutional churches.

Religious demographics in the United States are changing. These days, some feel quite uneasy walking into a sanctuary of a faith community, and some are equally apprehensive to affiliate with any form of organized religion. The Pew Research Center conducted two Religious Landscape Studies in 2007 and 2015, and researchers discovered that the numbers of the religiously unaffiliated are growing. Pew researchers coined the term “religious Nones” to describe individuals who are unaffiliated with any particular faith community. They also discovered that 61% of Nones believe in God, and many of them are interested in spirituality.

In response to this new terminology, others recognized that an additional term was needed. Sociologists, church historians, bloggers, and pastors began to use the term “Dones” to describe Christians who have maintained their religious identity but left established, institutional churches behind. The sociological studies of the Dones are revealing that many of these individuals have been among the most committed leaders and members in local congregations. After trying to stay, they felt they had to leave when churches condemned their questions of faith, practiced judgment, or refused to share power and leadership. Many Dones value participatory forms of church in worship, mission, and vision. Instead, they encountered institutional churches obsessed with their own survival while refusing to change or adapt in participatory ways. (See Josh Packard and Ashleigh Hope’s sociological study, Church Refugees: Sociologists Reveal Why People are Done with Church but Not Their Faith to learn more about this research.)

But even more, many are speaking with a longing for a new vision. Many Nones and Dones do not want to leave faith and spirituality behind altogether. But where can they go to engage spiritual practices and build Christian community together?

Some are beginning to answer that question in varied ways as spirituality meetup groups, justice organizations, and new worshiping communities are forming in organic ways across the United States.

But perhaps there is a more exciting question to ask:
Will the Nones and Dones eventually lead toward a new reformation of the Christian Church?

The Reformation Before Us

Phyllis Tickle was a brilliant scholar, researcher, and faith-filled friend of many. She died last year. With a delightful name and hilarious sense of humor, she invited people to ponder what the future of the Christian Church might look like. In her astute work, The Great Emergence: How Christianity is Changing and Why, Tickle articulates an intriguing premise that the Church experiences a major form of reformation approximately every 500 years.

Tickle gives a broad overview of the previous reformations throughout the history of Christianity, including the monastic movement (approx. 500 CE), the schism between the Eastern and Western Churches (approx. 1000 CE), and the Protestant Reformation (approx. 1500 CE). She argues that approximately every 500 years, a new form of Christian expression emerges outside of the current scope and institutional form of the Church. Each time, this new emergence tends to be more in step with the social, political, economic, and cultural shifts of the day.

Initially, when the new movement emerges, it experiences conflict with the traditional, religious communities that preceded it. But the new vision eventually has an effect on the older structures too; frequently, as a result of new movements, traditional Christian institutions experience a counter-reformation in response. Through both parts of the process, more people are authentically welcomed into Christian community.

So will we listen to them as they cast a new vision?
Time to connect beyond the doors of our own sanctuaries.

–Renee Roederer – These days, I am organizing a new community of friendship in Southeastern Michigan called Michigan Nones and Dones. This community is a part of Meetup.com and includes those who are religiously unaffiliated (the Nones), those who have left established, institutional churches (the Dones), and those who are connected to particular traditions but seeking new, creative forms for their expression.

“We Wouldn’t Want You to Go Hungry”