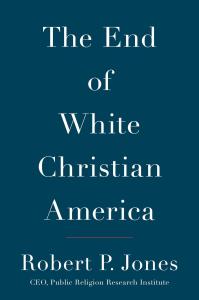 Ian and I were sitting at the dinner table a few nights ago, when we had this conversation:

Renee: Oh, for sure.

But I guess I mean this: During the years of the Obama Presidency, White Christian America began to feel as though they were tangibly losing influence, so —

Ian: — Why not then become more Christian?

Ian anticipated what I was going to say, which was that White Christian America doubled down on protecting its whiteness. But if Christians were worried about losing influence, why not become more Christian? In word? In deed? In message? In collective action?

I should say that by “White Christian America” I mean something specific. This is the terminology of Robert P. Jones and the Public Religion Research Institute. In his book The End of White Christian America, Jones argues that changing demographics are impacting the nation in these areas:

1) racial ethnicity in the United States (population trends indicate that by approximately 2045, those deemed as ‘white’ will no longer be a majority of the U.S. population)

2) religious disaffiliation (approximately 22.8% of Americans are no longer formally affiliated with any particular religious organization)

These have paired to raise anxieties among white Christians and their leaders.

Jones argues that in the wake of losing cultural and political influence, White Christian America began to assert its whiteness further and work tangibly to protect it.

Ian’s question has some grief in it. Worried about losing influence. . . ?

Why not then become more Christian?

2 thoughts on “That’s a Good Question”

There Are Many Ways to Say ‘I Love You’

“By Just Your Being You”

I’m a Christian and a Socialist

Speak Words Into the Air

The Other, Better Q

The Call to Anti-Racism