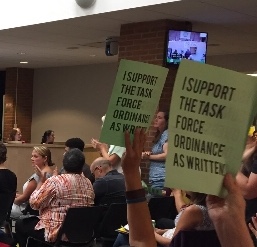 Presence matters. It sets the tone.

And of course, it does much more as well. But that was one of the points of reflection that stayed with me last night. Collective presence showed up in a large way as the Ann Arbor City Council began to deliberate upon an ordinance proposed by the Police Oversight Task Force. The turnout was huge, and that set the tone for the meeting.

There is a great deal of history behind the work of the Police Oversight Task Force and the ordinance they just proposed. I could write a paragraph or two about that, but it wouldn’t do justice to the stories behind that history. Behind the history lie stories of trauma in relationship to the Ann Arbor Police Department — harassment, abuses of power, surveillance and over-policing, and four years ago, the death of Aura Rosser, a Black resident in Ann Arbor who was shot and killed by AAPD Police Officer David Reid.

Keeping those stories as the backdrop, the history is far from a simple summary. Black residents of Ann Arbor have been pushing for an citizens oversight commission since the 1970s. When Aura Rosser was killed, several organizing collectives also began working consistently in that direction, amplifying voices of residents who had been calling for oversight for decades. Since 2013, these have included the Ann Arbor Human Rights Commission, the Ann Arbor Alliance for Black Lives, Transforming Justice Washtenaw, the Collective Against White Supremacy, the Huron Valley Democratic Socialists of America, the Interfaith Council for Peace and Justice, and the Ann Arbor Friends Meeting, among others. Many individuals from the community have added their voices as well.

After years of advocacy in this direction, the Ann Arbor City Council voted to form a Police Oversight Task Force, and after appointing particular individuals to serve (representatives were proposed by the Human Rights Commission) the Task Force began its work in 2018, which involved discerning, deliberating, debating, and drafting a proposed ordinance toward a vision for the formation of a permanent Police Oversight Commission.

The Task Force worked on this for six months and spent thousands of volunteer hours in this direction. And the community pushed them hard. Directly-impacted individuals and organizers were tenacious in showing up and demanding a vision for the future Commission which is 1) fully independent (among other aspects, not allowing law enforcement officials to serve on the Commission) 2) adequately funded, 3) supported with subpoena power, 4) and trauma-informed in protecting residents who make complaints, committed to uphold confidentiality whenever possible.

And then… Howard Lazarus, the City Administrator of Ann Arbor, drafted an alternative proposal which could subvert the work of the Task Force entirely. As City Administrator, Howard Lazarus is tasked with placing state laws and the city charter in conversation with this proposed ordinance so that City Council can reconcile any discrepancies should there be any. (By the way, there is dispute about potential discrepancies between Howard Lazarus and attorneys who served on the Task Force). But rather than make amendments to the proposal, he just drafted another document which subverted all four aspects I have mentioned above: 1) independence, 2) adequate funding, 3) subpoena power, and 4) trauma-informed confidentiality for complainants.

The Task Force listened to the community, particularly those directly-impacted from abuses of power by police, and through a process that was painstakingly hard, they proposed an ordinance that represented collective perspectives. Last night, however, there was deep concern and anger that one person in power, removed from direct-impact, might single-handedly subvert the entire process.

So the community showed up. Presence set the tone.

There was a huge turnout last night, and that in and of itself made a statement. The original agenda had placed Howard Lazarus’ presentation first, but City Council members made a motion to begin with the Task Force presentation instead. While members of the Task Force were not always in agreement in their own meetings, there seemed to be a great deal of unity against the City Administrator’s document and its implication. Their collective presentation was quite strong.

But above all, I kept thinking about presence. The turnout was huge, as was the implication of what the community was demanding. I found myself convicted by those who showed up and did the hard work when others were distant and there was less of a crowd.

Please also read a powerful poem about this meeting by Julie Quiroz. She organizes with Transforming Justice Washtenaw, one of the communities advocating most strongly for a Police Oversight Commission in Ann Arbor:

3 thoughts on “Presence Set the Tone”

Love on the Screen

With A Full Moon in Each Eye